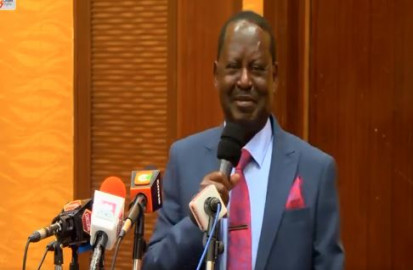 ODM party leader Raila Odinga has announced a raft of transformative measures he intends to implement in the agricultural, education and health sectors should he clinch the country's top seat in the upcoming August General Election.

Addressing a delegation of leaders from North Eastern region on Wednesday in Nairobi, Odinga promised that his administration would create a conducive environment for the creation of jobs and wealth for the citizens in the region.

Under what he calls his ten-point agenda, Odinga said at the top of his list is to introduce better education systems to citizens that will see every student have access to equal education services.

"On education, we need to start there in terms of transformation of our country. We need to give every child, despite the economic state of their parent, equal opportunities to study in nursery, primary, secondary up to university. Then they get respective jobs with their line of study and they will have jobs to sustain them," he said.

The ODM boss added that he will develop the meat processing industries in the region citing that their main activity is livestock keeping and in turn, boost the economy of the region's economy.

He made reference to Botswana whose economy is thriving because of utilizing its meat processing sectors.

"People with livestock should not be poor people, Botswana was one of the most successful countries with the best economy because of meat processing. That is a very strategic part of the economy and we can transform it to be better," stated Odinga.

At the same time, the former premier reiterated that he would introduce social protection programs that would see every Kenyan pocket a Ksh.6,000 monthly stipend.

"We are going to introduce a social protection program, so that every Kenyan with no source of income will be entitled to a monthly stipend of Kshs.6,000 per month. what I'm talking about is not fictitious," said Odinga.

Odinga added that his government will ensure that every citizen will have affordable health insurance cover under his 'Baba Care' health program.

"I talked the other day about Baba Care we give each Kenyan an opportunity for treatment, we want to have a level four hospital in every sub-county and every Kenyan will be enrolled under a health insurance scheme," he stated.

Treasury Cabinet Secretary Ukur Yatani, on behalf of the leaders, assured the northern region's support for the ODM boss affirming their confidence in his governance when he clinches the country's top seat.

He says they are willing to partner with Odinga to achieve his leadership agenda.

"We will be part and parcel of your political discourse in this country. I have no doubt of the symbiotic relations that will yield after this event," he stated.

"We want to assure you that we will support you without conditions and be partners in exploiting resources in building economic frontiers, not for us but the nation at large. We are proud and we are confident that you will take full control of this country."