Arizona High School: Inside Eastleigh school that shares seven-story building with other businesses 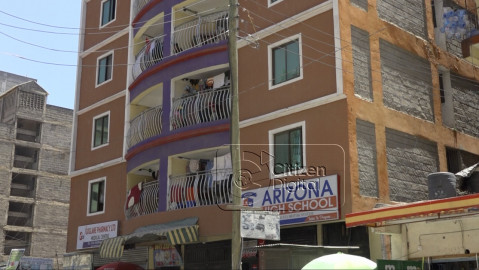 Schools are traditionally known to have several key features - a gate, pathway that leads into the school, fence, an administration block, rows of classrooms, an expansive field, assembly area and that very conspicuous flag post.

But for a particular school in Eastleigh, Nairobi, all those features remain a distant dream as Arizona High School, that even boasts of offering the prestigious British curriculum I.G.S.E, is basically housed at the ground floor of a seven-story apartment block smack in the middle of Eastleigh.

Accessing the school is a daunting task, as you weave through thin, muddy roads, squeeze between recklessly parked vehicles and have to delicately evade endless street vendors whose wares take up entire parts of the pathways.

Arizona High School is a school that has existed over the past several years, taking up the entire ground floor of a lofty apartment block all of whose floors are occupied by various tenants.

As you approach the apartment you can see students walking in and out of the apartment, dressed in sky blue uniforms chatting away and disappearing into the neighborhoods.

Sharing space with the school on the ground floor is a chemist and a fruit shop.

Next to the classroom is a tiny office that seems to house pretty much all the school's leadership - two desks and at least five office chairs probably meant for guests.

When Citizen Digital arrived at the school, a commotion immediately ensued with a teacher, a very feisty one at that, going by the name 'Sherlock' quickly rushing over to us, launching an impromptu grilling and casting aspersions on our true intentions.

"How do we know you are really from Citizen TV? Are you recording us? Do you have the right to record the school? What is your camera man doing over there? Is he recording me?" Mr. Sherlock threw around a flurry of questions.

We tried explaining ourselves, showed our press tags, assured him that he was not being recorded but still, things got trickier.

Word had spread round that people from the media were around and now, it was full commotion with people showing up seemingly out of the blue.

The teachers insisted that they would not talk to us on camera and threw around all manner of excuses.

"How did you know about us!?" Mr. Sherlock asked.

"You were trending on Twitter two days ago. Someone took a photo of your school, posted it on Twitter and you went viral. We decided to come and have a little talk and shine a little light on this unconventional school," we explained.

Now, every teacher was on a phone call.

We sensed tension and stepped back.

Mr. Sherlock, the de facto head of the teaching fraternity, came back again.

As we prepared to walk into the room, yet another gentleman arrived.

"Can I talk to you? Ita huyo mtu wa camera pia. Nataka tuongee," he said.

We later came to learn that he is the principal of the college extension of the school.

We were then ushered into the tiny office where we were all crammed into the seats as a lady, donning a burqa that covered almost her entire face, typed away in her computer.

But the gentleman who had just arrived, sank in his seat, looked at us pensively and launched into an entire speech explaining their fears and worries of being on camera and the ramifications of highlighting the school on TV.

Things got thicker and we clearly sensed that we were making no progress here.

While 'Mr. Principal' was still fretting his speech away, yet another man walked in.

The room was now filled to capacity and Mr. 'Sherlock' was quick to ask, "Is that camera recording? Are these conversations being recorded?"

Again, we assured him that our cameras were off.