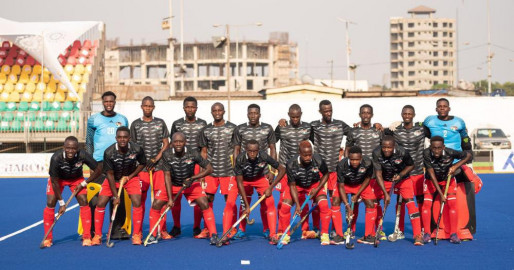 The Fidhelis Kimanzi coached side Chui, will face Nigeria in search for bronze medal.

National hockey team Chui are out of the continental championship campaign after going down 5-1 to Egyptian side Ismailia in semi-finals in Saturday's late evening fixture at the Theodosia Okoh hockey stadium in Accra, Ghana.

The Pharaohs Nasr Mohammed 11', Ragab Mostafa 12' 27', Adel Mohamed 37' and Elnagger Ahmed 43' were on target to bag all the points ahead of the African Cup of Nations finals tomorrow.

The Fidhelis Kimanzi coached side Chui, will face Nigeria in search for bronze medal at 1715 hours EAT.

Chui began their campaign well few hours after landing at Kotoka International Airport following with a 4-1 victory over Namibia.

The victory saved them to advance to semi-finals after falling 2-1 to defending champions South Africa.

Team Kenya which arrived on the second day of the 11th men and 8th women continental championship, have shown their best despite travel exhaustion.

Tausi on the other hand, will face Zimbabwe in women third place playoff.

The winners of ACN contest that takes place after every four years, will qualify for the International Hockey Federation (FIH) hockey world cup set for next year.