KICKER KICKER: Election rule number one - It is garbage in, garbage out 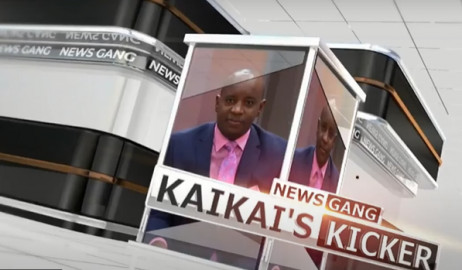 On my kicker, a quote attributed to Irish statesman and philosopher Edmund Burke must surely speak to every Kenyan this election year. The philosopher says, and I quote, “The only thing necessary for the triumph of evil is for good men to do nothing.”

On August 9 this year, there will be an election in this country, whether good men do anything about it or not. Let me not risk categorising politicians into good and evil or even defining the upcoming election as a contest between between good and evil; not now; and not when our foremost skeptics remain sure that it will just be the usual festival of bad choices.

With just over six months to the elections, it is the hopeless tone of the skeptics that should send every Kenyan to action – not in August but right away. As the prayerful nation we are, we dutifully pray that we get good leaders. In the coming days, religious leaders will be saying prayers, asking for leaders who can inspire hope and fire up the country to greater heights of progress, in peace and harmony. Divine intervention is all good, but a basic, earthly formula must also be in place. And it is a simple one in my view; to get good leaders, Kenyans must first find good aspirants.

And so I suggest that when it comes to political leadership, good or bad choices are made way before the election date and sometimes, way before the party primaries or nominations that convert successful aspirants to candidates for election. Consequently, I also suggest tonight that Kenyans pay attention to where it matters most – the aspirants stage.

You see, there that not so old adage, garbage in, garbage out. Without the right aspirants, Kenyans should not expect to get the right candidates. We can’t expect in August what we don’t have when party nominations conclude in May. It is all down to that simple rule - garbage in, garbage out – the quality of  output, is determined by the quality of the input. This adage was recently the rather telling subject of an ironic exchange between Speaker of National Assembly Justin Muturi and Senators Kipchumba Murkomen of Elgeyo Marakwet and Ledama ole Kina of Narok.

It started with Senator Ledama castigating Members of Parliament for their chaotic conduct during the vote on the Political Parties Bill and asking Speaker Muturi what he had done about the conduct. Speaker Muturi fired back and I quote: “Do not blame me. The voters get as good as they vote in – garbage in, garbage out.”

Senator Murkomen wound up the dumpsite exchange with a brutal jibe; “Did the garbage also elect a speaker they deserve?” He asked Muturi.

I need not to detail that exchange beyond there, except to say Kenyans must have a similar frank discussion ahead of the August 9 election. Do we have the right aspirants for president, governor, member of National Assembly, Senator, Woman Representative or even Member of County Assembly? This is the question voters ought to strive to answer if our political reality is going to be confronted and transformed for the better this coming August.

I only wish the exchange between Speaker Muturi and Senators Murkomen and Ledama went on to spill the beans by giving us insights on the composition of our general elected body. You will be shocked by the reality of our elective politics. If it were to be put frankly, political offices constitute some of the darkest hideouts for wrongdoers that include especially, grand corruption suspects among others.

The sad reality is, as Kenyans we have not always been led or governed by our best. And that has largely been our choice.

That is my kicker!