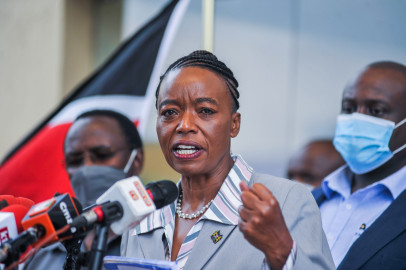 The Ministry of Energy says it will now turn pressure on Kenya Power related agencies in its quest to reform the energy sector including lowering the cost of electricity.

Speaking on Friday, Energy Cabinet Secretary Monica Juma said the utility company cannot be the only party from which accountability and efficiency are to be demanded.

“This exercise is not limited to KPLC, we are also looking at other state and government agencies (SAGAs) in the ministry to ensure alignments across the ecosystem,” she said.

“We are going to drive accountability across the sector because it does not matter whether you are talking about generation, transmission or distribution. Each piece is dependent on the other. If one part fails, it doesn’t matter if the other is functioning optimally. Accountability is going to be demanded at every point of the value chain.”

The latter is in charge of distributing electricity in rural areas including the Last Mile Connectivity project while the former mainly puts up high voltage transmission lines.

Despite being active participants in power transmission and distribution, the agencies have largely enjoyed cover as the public tears apart into Kenya Power for persistent inefficiencies in the supply of power.

Already, the Ministry has moved to assure that all agents in the sector are matched to their specific roles as it seeks to eliminate the distribution of function.

Last week, for instance, the ministry through the sector regulator, the Energy and Petroleum Regulatory Authority (EPRA) designated KETRACO as the system operator making it responsible for matching consumer energy demands with electrical energy available, maintaining electric power system security and arranging for the dispatch process.

At the same time, the Ministry of Energy has assured Kenyans of the secondary 15 per cent cut to power costs with negotiations with independent power producers set to enter the formal stage shortly after preliminary engagements which points to the possibility of an amicable review to power purchase agreements (PPAs).

“We are in the final preparatory stages for the official engagement with each of the IPP. So far, as is demonstrable, the Government has extended itself by taking critical actions towards the objective of reduction of tariffs. It is our hope that this goodwill will be reciprocated by the IPPs when we commence the formal negotiations,” added CS Juma.

Earlier this month, EPRA published new tariffs which reduced the energy charge to consumers by between 20 and 23 per cent reflecting the government’s promise of trimming electricity costs by an initial 15 per cent.

The secondary cut is expected to come into effect at the end of the current quarter to March.