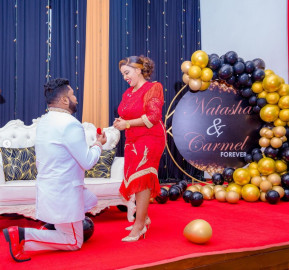 Their engagement was held at the Boma Hotel- a five-star hotel- perhaps as testimony of the two lovers who love the finest thing in life.

Prophet Stanley was dressed like an army general, in white ,while Reverend Natasha wore a Sari-inspired midi dress as if complementing  the earthly commander of her heart.

Invited guests who included Natasha's mother pastor Wanjiru, brother Joseph Shafique, sister Shiphra and her entourage from her church all wore white, while others, as per the invite, wore Indian regalia.

She would later caption several photos of her man on one knee, including the one in which he slipped a ring on her finger:

"My Love Carmel may the rest of our life's journey together be filled with God's grace, blessings, provisions, protection and guidance,"

"He has made everything beautiful in its time," Natasha captioned a photo of her in the flowing gown.