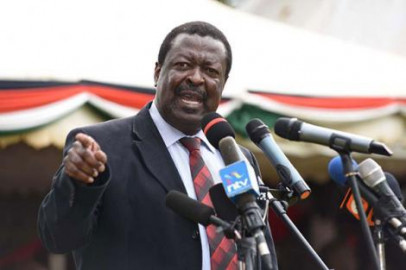 Amani National Congress (ANC) leader Musalia Mudavadi has appealed to Kenyans to refrain from utterances that are likely to cause tension, with Kenya's General Election just months away.

Mudavadi, a 2022 presidential hopeful spoke to the media shortly after attending a church service at Redeemed Gospel Church  in Nairobi.

The ANC leader said leaders who make controversial statements whenever they see crowds should be careful because the 2007-2008 post election violence in which over 1,000 were killed, and thousands displaced begun in similar fashion.

His sentiments come in the wake of furore over Meru Senator Mithika Linturi's remarks during a UDA rally in Eldoret.

The controversial Senator  was arrested in an Eldoret hotel on Sunday morning and carted off to Nakuru where he recorded a statement before his transfer to Nairobi.

In his letter to the police boss on Saturday, DPP Haji stated: “My attention has been drawn to a video clip circulating on social media platforms portraying Mithika Linturi allegedly addressing a crowd and stating that … which utterances could incite feelings of contempt."