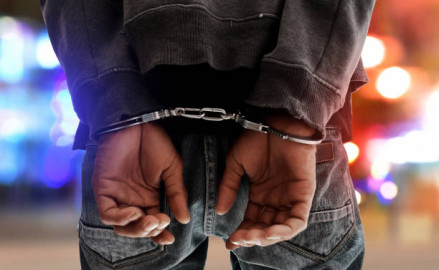 According to the Directorate of Criminal Investigations, the three; Erick Kipkurui Kogo, Philemon Kiprotich Ng'eno and Joseph Achila Ondieki, were arrested at Kipchimchim trading centre.

The arrest comes as part of a crackdown on motor vehicle theft syndicate in the county. A stolen car report on January 16, 2022 was made at Litein Police Station prompting the manhunt.

"The manhunt & subsequent arrest of the trio followed a stolen car report booked on January 16, 2022 at Litein Police Station, where a KCQ 318K Toyota Probox vanished from a car park," reads a statement from the DCI.

Detectives from Kericho and Londiani said the suspects hid the car for a week as they sourced for fake number plates and a potential buyer.

"Armed with forged documents and replacing the original registration plates with KCU 994X, the three suspects emerged at Kipchimchim trading centre where they hoped to dispose it," the DCI added.

"Unbeknownst to them, a joint team of Kericho and Londiani detectives were on their trail, netting them at the location and recovering the motor vehicle."

The suspects are set to be arraigned as investigations continue to establish whether any links to a possible larger ring involved in the felony.