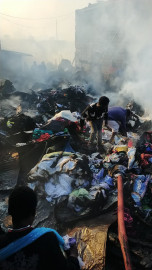 A trader assesses damage following a night fire that gutted down a section of the Gikomba Market.

Hundreds of traders at the expansive Gikomba Market have urged expedited probe after a serious fire  gutted down section of the market in the wee hours of Monday morning.

Efforts to quell the fire were still in top gear on Monday morning as county employees, and distraught traders trooped to the market to assess the damage.

Several videos posted online showed a huge fire engulfing stalls in the market although the exact damage , or cause of the fire is yet be determined.

Traders who lost stalls in the mysterious fire said they were alerted to the incident at around 1am on Monday.

Faith Wambui, one of the traders who lost everything in the fire said she learnt of the incident at around 1am, and by that time, everything she knew had been reduced to ashes.

The traders say that 2015 was the last time they witnessed  fire incident of such magnitude.

Nairobi county fire engines that arrived at the scene had a hard time battling the flames that rose high and burned relentlessly.

Gikomba has battled multiple fire incidents in the recent past, with the most recent being in June, August and October.

The latest incident comes days after a Nairobi Court allowed the Nairobi Metropolitan Services (NMS) to evict at least 174 traders from the market to pave way for the expansion of a health sector.