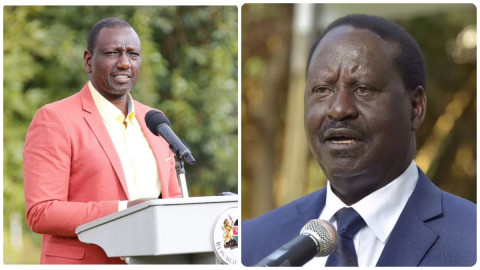 Deputy President William Ruto will tour Migori County on Sunday, as part of his vote-seeking mission ahead of the August 2022 polls.

His day will begin with a church service at Isebania Parish in Kuria West at around 9am. He will thereafter make a stopover at Getonganya town at around 11am.

According to his itinerary, the second-in command, will also address the public at Kehancha town before proceeding to Kuria East with scheduled stopovers at Nyamotambe, Nyabikongori and Wangirabose.

Meanwhile, ODM leader Raila Odinga who seeking Kenya’s top job under the ‘Azimio La Umoja’ call, will be celebrating an extended version of his 77th birthday by visiting the mothers of political prisoners.

In a statement on Saturday, Raila said the visit to Kibichiku Secondary School grounds in Kiambu will be in remembrance of his late mum who died while he was under political detention, as well as honour other mothers of political prisoners.

According to his itinerary, Raila will begin his packed day with a church service at St John ACK church.

He will thereafter visit Mama Kang’ethe’s home where he will join several mothers of political prisoners.

Under Raila’s government, as per the statement, the mothers of political prisoners stand to get housing and State recognition.

The former Prime Minister will also make a stop over at the library and office of Release political prisoners.