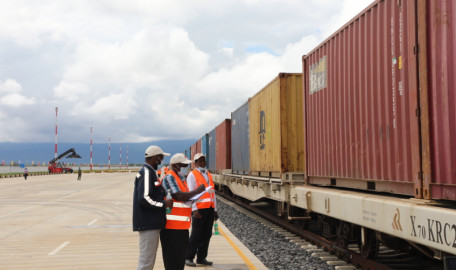 Stakeholders in the transport sector have decried a plan by the Kenya Railways (KR) to settle on Rail transport for cargo from the Mombasa port to Malaba.

Kenya Railways wants cargo transported from Mombasa to the Inland Container Depot (ICD) in Mai Mahiu using the Standard Gauge Railway (SGR) after which Mai Mahiu-Longonot railway will transport it to Malaba through the newly constructed meter-gauge railway line.

The move by KR is centred on boosting economic growth in terms of saving on costs associated with road transport, reducing transportation time and minimizing road accidents believed to be caused by trailers.

During a launch of the trial train from Mombasa on Monday, Kenya Railways Managing Director Phillip Maingi noted that trucks currently take about four days to arrive at Malaba from Mombasa a distance that will take only 28 hours by rail if it is initiated.

Naivasha Road Safety chairman James Kabono pointed out that 80 percent of accidents and traffic-snarl ups along the Mai Mahiu-Limuru road were caused by the trailers.

“This will not only reduce traffic on the roads but also cut down the expenses incurred by companies and individuals while ferrying cargo,” Maingi said.

Nakuru Governor Lee Kinyanjui also buys in the idea of adopting rail, asserting that it will be an economic boom for the new city.

“We expect the clearing and forwarding operations to be conducted around Longonot and Mai Mahiu which is now one of the fastest-growing towns in the country,” he said.

Chairman of the truck drivers’ association, Samson Makhoha has faulted the idea by KR saying that it would lead to massive job losses and collapse of businesses for towns along the busy Mombasa highway.

Makhoha explained that the towns’ economic backbone has been the benefits they get from road users, adding that many sources of livelihood would be injured.

“It will mean job losses for tens of drivers, mechanics and even insurance companies that insure cargo and vehicles,” he said.

Makhoha added: "Towns along the Mombasa- Nairobi- Malaba highway that depended on truck drivers will suffer a painful death.”

Similarly, cargo interveners in Mombasa on Thursday, underscored that road transport would face a major hitch since it has benefited hugely from the sector.

“The new program would deal a blow to the road transport sector which is dependent on the last mile business to remain afloat,” they explained.

Kenya Ships Agents Association (KSAA) which had prior objected to the move by KR citing security concerns now believes that KR must assure seamless connectivity from the SGR to Meter Gauge Railway at Naivasha for the directive to be effective.

"A thorough bill of lading system (TBL) should also be introduced to guarantee the security and safety of the cargo," KSAA Chief Executive Officer Juma Tellah said.

“We opposed it last year because the systems were not in place. If implemented haphazardly it could lead to delays which would attract demurrages."