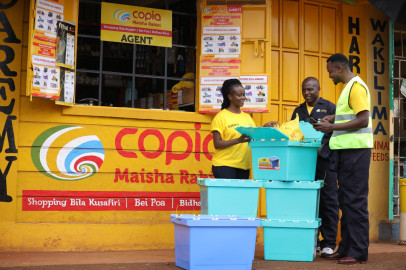 Kenyan e-commerce start-up Copia Global has raised over Ksh.5.6 billion ($50 million) from a Series C equity round to boost its efforts to expand across African countries.

Founded in 2013 by former Silicon Valley maestros Tracey Turner and Jonathan Lewis, the business-to-consumer (B2C) company provides a platform for rural, middle to low-income consumers to order products that are delivered at their convenience.

The company, which expanded to Uganda in 2018, said the ew capital will enable it to grow its existing model in Kenya and Uganda and in the future, Rwanda and Tanzania.

Copia also noted that it might expand into Nigeria, Ghana, Côte d’Ivoire, South Africa, Zambia, Mozambique and Malawi, depending on the territories’ economic and political climates.

The company’s model comprises digitally-enabled, locally based agents who operate as order and delivery points to meet consumers where they are, online or offline.

The agents are existing trusted shopkeepers like a local grocer or butcher, where customers can select and pay for products chosen from a Copia catalog.

Once a customer places an order, Copia sends an SMS order confirmation to both the agent and the customer and in 2 days, Copia delivers the products to the agent for customer pick up.

According to TechCrunch, the company previously raked in Ksh.2.9 billion ($26 million) from a Series B round in 2019 and another Ksh.851 million ($7.5 million) in Series A funding after its inception.