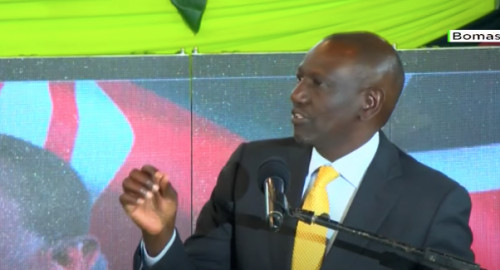 Speaking on Sunday at the Bomas of Kenya in Nairobi following the launch of Mudavadi’s presidential bid, Ruto stated that he had joined hands with Mudavadi’s machine towards a national transformation mission.

“We will work with ANC, Ford-Kenya and all other parties that want to walk with us in this journey of bringing the nation together,” said Ruto.

“We are going to raise the bar and standard of leadership so that deceit, lies and conmanship do not become part of the equation of leadership in Kenya.”

Under the new UDA-ANC partnership, Ruto vowed to uphold democracy and ensure that Kenya does not degrade into an authoritarian state.

“...Ensuring we protect and consolidate our democracy that every Kenyan, as provided by the constitution, can make choices and refuse the criminalization of decent or alternative views,” said the DP.

“...That the criminal justice system cannot be weaponized to drive political narratives and erect political projects for purposes of making Kenya a preserve of those in power,” he added.

While hailing Mudavadi’s scathing speech on the sorry economic state of the country, Ruto further expressed optimism that his ‘bottom-up economics’ agenda and Mudavadi’s ‘Uchumi Bora, Pesa Mfukoni’ platform are the solutions the country needs.

The DP announced that the new camp’s campaign run is set to kick off this week in Nakuru County as they popularize their bid.

“The journey to bring this unity together has started in Bomas and our next stop will be Wednesday in Nakuru County and Friday in Western Kenya,” the UDA leader stated.

Despite ANC dismissing earlier reports that DP Ruto would attend the much-hyped ‘earthquake’ day, Ruto showed up flanked by his UDA machine, no less.

Those allied to the DP in Sunday’s convention include governors Steven Sang (Nandi), Jackson Mandago (Uasin Gishu) and their Kirinyaga counterpart Anne Waiguru.

Speaking at the event, Waiguru praised the partnership saying it had the numbers it needs to clinch the presidency as well as the solutions Kenya needs.

“Tuna hakika yakwamba the fifth president of the Republic of Kenya is right now in this room. If you combine ANC’s ‘pesa mfukoni’ with UDA’s ‘bottom-up’, tutakuwa tumekomboa nchi yetu ya Kenya,” she added.