SWILA: The spectacle, surprises and lessons of 2021 AFCON 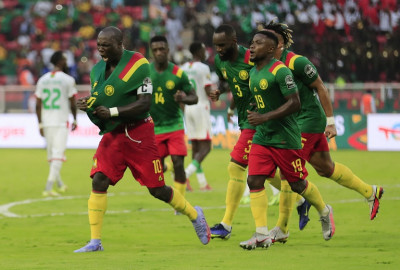 From riveting football in some, the dullness in others and the expectations of fans there has been plenty to talk about.

The 33rd edition of the Africa Cup of Nations which is ongoing in Cameroon has presented some spectacles, surprises, challenges, experiences, and least of all learning lessons.

From riveting football in some, the dullness in others and the expectations of fans there has been plenty to talk about.

In Pool A, Cameroon sailed through as group leaders, on seven points, while Burkina Faso and Cape Verde sailed through – all on four points as Ethiopia became the first team to bow out of the tourney having mustered just a point from the three matches it played at the group level.

Group B equally presented its fair share of spectacle – Senegal – the top ranked team in Africa emerged as the group leader albeit with just five points – from two draws and a win while Guinea and Malawi also scrapped through, the latter as one of the four best losers.

Senegal however surprised many as they struggled in these matches, a far cry from the sleek side in 2019 that went all the way to the final, leaving in its wake casualties including Kenya’s Harambee Stars.

In Group C the Atlas Lions of Morocco were heads and shoulders above everyone claiming seven points while Gabon, who have been incredible even without star striker and captain Aubameynag who was ruled out of the tourney due to Covid effects nailed a runners-up slot on five points, attracting the praise of their president Ali Bongo Ondimba. The surprise in this group was the elimination of the Black Stars of Ghana, a four-time cup winner and one of the teams that had been tipped to challenge for the title.

Ghana, heading to this competition had in their ranks a fairly decent squad led by their captain Andre Ayew but perhaps everything lethargic in their performances was best mirrored by their skipper whose conduct in the tourney left a lot to be desired. He not only picked unnecessary quarrels with match officials but also needless cards when he should have been the sober head to lead, guide and inspire his team mates even when game plans seemed to crumble. That is the work of the captain, but on this the good Ayew failed!

Perhaps the most impressive of the teams has been Nigeria. Prior to the tourney they did not carry the favourites tag but made their intention clear from the opening match, going on to sail through as Group D leaders with a 100 percent record, beating among others, record seven-time winner Egypt who had to contend with a runner up slot as Sudan and Guinea-Bissau all crashed out with two points apiece.

In Group E the Elephants of Ivory Coast, under the captaincy of Serey Dié topped the group on seven points after two wins and a draw. However their most memorable win so far in this competition has to be the emphatic 3-1 tramping of Algeria’s Desert Foxes.

In this match The Elephants were impressive against a very lame duck Algeria but who were the firm favourites to retain the gong they won in Egypt in 2019 with a 100 percent record, sweeping all before them, including Senegal, at the group stage and in the rematch in the final!

Fast-forward, the Desert Foxes, under the same head coach Djamel Belmadi, with a good number of star players, survivors from the last edition, seemed to have lost their mojo, albeit under not-so-clear circumstances. They were not only outplayed but also tone apart with one of Ivorian’s goals being ruled out, which would have made for an embarrassing defeat.

Equatorial Guinea, a minnow of a country punched equal to its weight to a secure a slot in the last-16 which begins tomorrow, bagging six points out of the possible nine, while Mali topped Group F on seven points as Gambia bagged the runners up slot on equal points, leaving Tunisia to scrape through as one of the four best losers.

With the group stage matches over, focus shifts to the knockout matches. Hosts Cameroon will be aiming to get into the last eight when they battle islanders Comoros who are making their maiden appearance at the AFCON. Senegal, with no title to their name will be up against Cape Verde, Morocco face Malawi Flames, The Elephants of Ivory Coast battle Egyptian Pharaohs, Mali up against Equatorial Guinea as Gambia wrap it up at this stage with a date against Guinea.

Importantly, AFCON has presented many opportunities and learning experiences.

For Cameroon, a country known more for its football prowess thanks to the exploits of its former greats such as Samuel Etóo, Patrick Mboma, Rigoberto Song, and the ilk, as well as the long and ruthless rule of its president Paul Biya who has ruled with an iron fist for 40 years, AFCON has presented the west African nation with another opportunity to present herself to the world, its diversity – culture and hospitality - as well as its ability to plan and host major sporting events.

In the eyes of Africa and the world this is a major score, its weak GDP notwithstanding and this is a badge of honour they’ll wear with pride in the months and years to come.

Teething problems, normal under such circumstances, could have been aplenty but it does not take away the fact that they managed to organise a major competition in the middle of a pandemic.

For East Africa, Kenya in particular, the 33rd edition of the tourney presents gaping holes – embarrassing ones for that matter which needs to be quickly fixed.

Of the four regions – north, west, south and the east making up our beloved continent of Africa, the East has failed to host AFCON thanks to her mediocre sporting infrastructure.

Today, not Kenya, Uganda, Rwanda, Burundi or Sudan can host the AFCON. This is both a shame and wakeup call to governments and federations from this part of the world.

There is need for pragmatic and deliberate efforts -  medium and long term that governments from the East Africa region must put in place to ensure that the region, in the near future, can host a tournament of this magnitude.

Tournaments such as this grants players an opportunity to market themselves to the world and there is no doubt that scouts from all over the world are closely monitoring the competition in Cameroon and from it there are players who will earn new deals and attract new clubs – moreso for those domiciled in Africa.

Equally, teams from the region – Ethiopia and Sudan who participated in this tourney were all kicked out at the preliminaries while others such as Kenya, Uganda, Rwanda, Tanzania, Burundi did not qualify to eat from the fabled table of kings. This is an indictment to the state of football in the entire region and deliberate steps must be put in place to make East Africa’s soccer to grow and be at par if not better with north and west African teams.

The poor performances from teams in this region has in many cases been put to bare at the continental inter-club championships. In short, it can no longer be business as usual in East Africa. A radical approach needs to be undertaken to spur the game, right from the grassroots. It involves weeding out the inept and corrupt federation officials and setting up of feeder programmes and strong monitoring and mentorship systems.

Let the action roll on and may the best team win.

The author is an editor at RMS