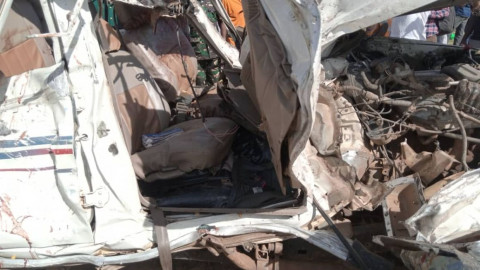 Busega’s District Commissioner Garbriel Zakaria confirmed the accident, saying that four journalists and their driver plus six others from the PSV died on the spot. PHOTO | THE CITIZEN | NMG

﻿Fourteen people, among them six journalists, have been killed while several others sustained injuries following a road accident in the Nyamikola Busega district of  the northern part of Tanzania.

Confirming the accident, Busega’s District Commissioner Garbriel Zakaria said that the accident involved a Land Cruiser that rammed on an incoming PSV van killing 11 on the spot and three dying while being taken to hospital.

The 6 journalists were on convoy with Mwanza Regional Commissioner, Robert Gabriel, who were said to be travelling for official duties. Four of them were said to have died on the spot together with their driver.

“A minibus was trying to overtake another vehicle, then it collided with the vehicle carrying journalists and government officials,” said Mr.Zakaria at the scene of the accident.

“It’s true that the accident has now claimed the lives of fourteen people, 11 people died on the spot. A few minutes after the injured were taken to Nasa health centre, three others passed away.”

President Samia Suluhu Hassan has since, through her twitter account, condoled with the friends and families of the deceased.

"I am shocked by the deaths of 14 people, including six journalists, who passed away this morning after a car they were travelling in collided with a PSV. I send my condolences to the families, journalists and friends who have lost their loved ones. May God rest the souls of the deceased in peace and may the wounded heal quickly,” wrote President Samia.

Another 6 people were injured during the incident and are receiving medical treatment in hospital.