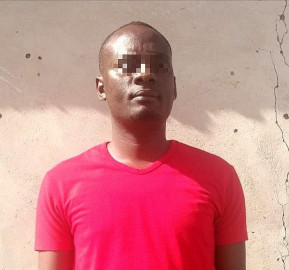 A teacher at Musiini Pry Sch in Makueni County was on Saturday arrested after making a fake announcement that the Teachers Service Commission (TSC) CEO Nancy Macharia had died.

The suspect identified as Jeremiah Mwavuganga Samuel, 31, is said to have used a fake Facebook account authoring a post claiming that the TSC CEO is dead with the caption:

"Breaking news NANCY MACHARIA IS DEAD. Her body has been found in Oyuu's bed . It is alleged that Oyuu madad her after she failed to...***. R.I.P Macharia...ooh it was just a dream. May it be so," read the post.

The DCI has since said, in a statement, that Samuel was found in possession of a handset that is believed to have been used in creating the post.

"Upon his arrest, Mwavuganga - who has been a teacher at the said school for four years - was found in possession of the handset used in creating the viral post. The Facebook account used was also confirmed to be his," said DCI.

He was escorted to DCI headquarters ahead of his arraignment Monday, January 24.

The DCI has also warned members of the public who misuse social media platforms to author misleading messages aimed at causing humiliation, blackmail and defraud.

They have vowed that suspects found will by punished by the law and brought to book.