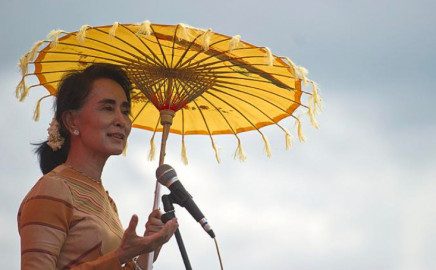 Earlier in the day, Suu Kyi was sentenced to four years in prison on charges of incitement and breaking Covid-19 rules, in the first verdict against the Nobel Peace Prize winner since the military seized power in February.

Suu Kyi, 76, was Myanmar's state counselor and de facto leader of the country before she was ousted and detained by the military 10 months ago and hit with almost a dozen charges that add up to combined maximum sentences of more than 100 years.

They include several charges of corruption -- which each carry a maximum prison sentence of 15 years -- violating Covid-19 pandemic restrictions during the 2020 election campaign, incitement, illegally importing and possessing walkie talkies, and breaking the colonial-era Official Secrets Act -- which carries a maximum sentence of 14 years in prison.

She has rejected all allegations and her supporters say the charges against her are political.

It is not clear where they will carry out their sentences.

Myanmar's military junta has sought to restrict information about the trials, which have been closed to the public. In October, a gag order was imposed on her legal team that prevented them from speaking with the media.

Amnesty International's Deputy Regional Director for Campaigns, Ming Yu Hah, said in a statement, "the farcical and corrupt decision is part of a devastating pattern of arbitrary punishment."

"The harsh sentences handed down to Aung San Suu Kyi on these bogus charges are the latest example of the military's determination to eliminate all opposition and suffocate freedoms in Myanmar," Ha said.

"There are many detainees without the profile of Aung San Suu Kyi who currently face the terrifying prospect of years behind bars simply for peacefully exercising their human rights. They must not be forgotten and left to their fate."

More than 1,300 people have been killed by Myanmar security forces since the coup, and more than 10,000 arrested, according to advocacy group Assistance Association for Political Prisoners.

The United Nations Security Council has called for an immediate cessation of violence across Myanmar as junta troops escalate hostilities with civilian militias, displacing tens of thousands of people. Since the coup, nationwide protests against the junta have been met with brutal crackdowns and independent media and opposition has been suppressed.

"As violence escalates, displacing tens of thousands of people and setting up a humanitarian crisis in the middle of an ongoing pandemic, the situation in Myanmar today is alarming in the extreme. Without a decisive, unified and swift international response this can and will get worse," Amnesty's Hah said.

The verdict comes a day after security forces cracked down on a protest in the country's biggest city Yangon on Sunday, prompting condemnations from the UN and the United States.

At least five people were killed when a vehicle plowed into anti-junta protesters, news outlet Myanmar Now reported Sunday, citing protesters and eyewitnesses. One reporter who witnessed the incident told CNN that it was a military vehicle that rammed demonstrators.

Eleven protesters were also arrested at the scene of the incident, including two men and one woman who were injured, according to a statement by Myanmar's military. However, the statement did not acknowledge the reported deaths or the alleged vehicle attack.

The UN in Myanmar condemned the incident slamming the "reported attack on a number of unarmed civilians in Kyimyindaing Township, Yangon, in which a vehicle belonging to security forces rammed into protesters who were then fired upon with live ammunition leading to deaths and injuries to numerous people."

The US Embassy said it was "horrified by reports that security forces opened fire against, ran over, and killed several peaceful protesters."