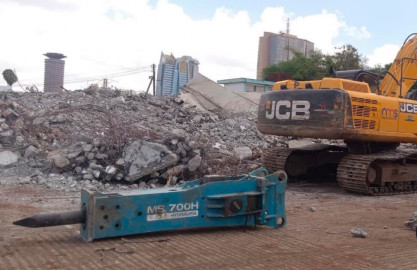 The Nairobi Metropolitan Services (NMS) was Thursday dealt a blow after the High Court declined to lift an order suspending renovations at Uhuru Park.

NMS and Director-General Lt General Badi had claimed that he was not served with the petition and that the order was issued without hearing his side.

"I find that the service was properly effected and all the respondents, including the 2nd respondent (Lt Gen Badi). The 2nd respondent cannot choose at this stage to argue that he was never personally served,” the judge said.

The Communist Party of Kenya moved to court arguing that the respondents who include the Nairobi Metropolitan Services (NMS) and County Assembly of Nairobi are cutting down trees and in turn destroying the flora and fauna at the Park.

“The 1st Respondent has also initiated a process of replacing the green lawn of grass at the Park with concrete cement blocks, an action which, unless stalled by this Court, will greatly degrade the botanical and environmental qualities of the Park to the detriment of Nairobi residents who have been the greatest beneficiaries of the same,” reads court papers

Further, they argue that already the respondents have destroyed the historic pavilion at the Park, and intends to cause further destruction to the other historic sites at the Park.

The petitioner further claims that the project is shrouded in secrecy and no public participation was conducted before embarking on the works at the park.

"The project is shrouded in secrecy, where the whole Park has been blocked from the public, and all attempts by the Petitioner to gain information on the Project from the 1st and 2nd Respondents have failed," reads the documents.

The Communist Party of Kenya wants the court to order that the park be reinstated to its position before the renovations, including opening the Park to the public, planting grass, planting trees and rebuilding the main pavilion.