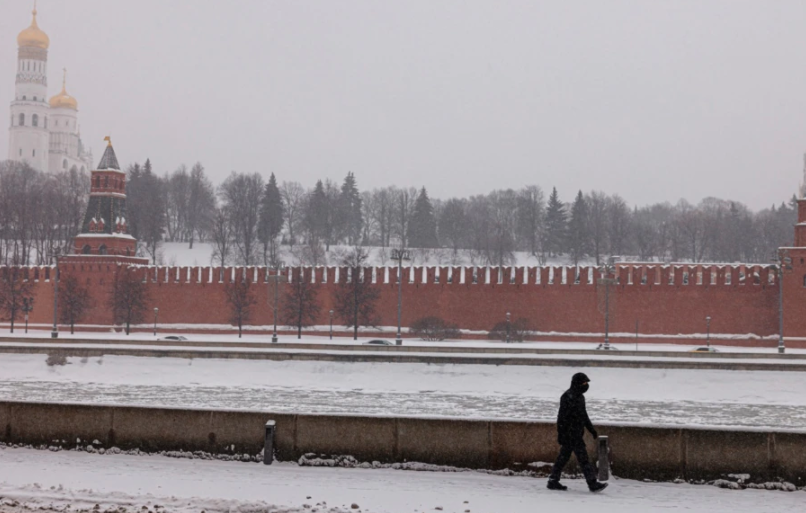 FILE - A pedestrian walks along an embankment of the Moskva river with the Kremlin on the background during a snowfall in Moscow, Jan. 21, 2022.

Russia on Wednesday rejected the prospect of U.S. sanctions against President Vladimir Putin, one of several proposed responses if Russian forces were to invade neighboring Ukraine.

Kremlin spokesman Dmitry Peskov told reporters that such sanctions would not be politically painful, but would be “destructive.”

U.S. President Joe Biden on Tuesday warned of “severe” and “enormous” consequences for Putin — including personal sanctions against Putin himself — if the Russian leader mobilizes the estimated 127,000 troops who stand ready to strike along the Ukrainian border.

“I have made it clear early on to President Putin that if he were to move into Ukraine, that there would be severe consequences, including significant economic sanctions as well as I’d feel obliged to beef up our presence, NATO’s presence, on the eastern front, Poland, Romania, etc,” Biden said, adding: “If he were to move in with all those forces, it would be the largest invasion since World War II. It would change the world.”

He also stressed that none of the 8,500 U.S. troops put on high alert this week would be moved into Ukrainian territory, and they would be deployed as part of a NATO operation, not a sole U.S. operation. He did not say when he might decide to order those troops into theater.

Biden said the United States has a “sacred obligation” to come to the aid of NATO allies that face threats. Ukraine is not a member of NATO — though it wants to be. However, neighboring Russia sees possible NATO membership as a threat and has demanded that the security alliance bar Ukraine from membership. Putin has said he has no intention to invade Ukraine but sees NATO’s eastward expansion as a threat.

“And I’ve spoken with every one of our NATO allies ... virtually, and we’re all on the same page,’ Biden said. “We’ve got to make it clear that there’s no reason for anyone, any member of NATO, to worry whether or not ... we — NATO — would come to their defense.”

Efforts to resolve the situation diplomatically involved talks last week among Russia, the United States, NATO and the Organization for Security and Cooperation in Europe.

Russia is awaiting a written response to its proposals, and Foreign Minister Sergey Lavrov told lawmakers Wednesday that if “the West continues its aggressive course, Moscow will take the necessary retaliatory measures.”

“There are no rose-colored glasses, no childish illusions, everything is not simple. ... But there is hope,” Zelenskiy said. “Protect your body from viruses, your brain from lies, your heart from panic.”

Zelenskiy said plans are being made for him to meet with the leaders of Russia, Germany and France. Officials from the four countries were due to hold talks on Wednesday in Paris.

French President Emmanuel Macron said Tuesday he would seek clarification about Russia’s intentions during a phone call with Putin scheduled for Friday.

Pentagon spokesman John Kirby, in a response to a question from VOA, said Tuesday that Russian forces have grown “consistently” but not “dramatically.”

“We have seen a consistent accumulation of combat power by the Russians in the western part of their country around the borders with Ukraine and Belarus,” Kirby said.

Earlier in the day, the United States warned Russia it would face faster and far more severe economic consequences if it invades Ukraine than it did when Moscow annexed Ukraine’s Crimean Peninsula in 2014.

“We are prepared to implement sanctions with massive consequences that were not considered in 2014,” a national security official told reporters in Washington. “That means the gradualism of the past is out. And this time, we’ll start at the top of the escalation ladder and stay there.”

“We use them to prohibit the export of products from Russia,” the official said. “And given the reason they work is if you … step back and look at the global dominance of U.S.-origin software technology, the export control options we’re considering alongside our allies and partners would hit Putin’s strategic ambitions to industrialize his economy quite hard, and it would impair areas that are of importance to him, whether it’s in artificial intelligence, quantum computing, or defense or aerospace or other key sectors.”

The United States and its allies imposed less severe economic sanctions against Moscow after its Crimean takeover, but they ultimately proved ineffective, and the peninsula remains under Russian control.

Russia’s demand that Ukraine be barred from NATO has been dismissed by the West, where leaders have said they won’t give Moscow veto power over who belongs to the 30-country military alliance that was founded to counter Soviet aggression after World War II.