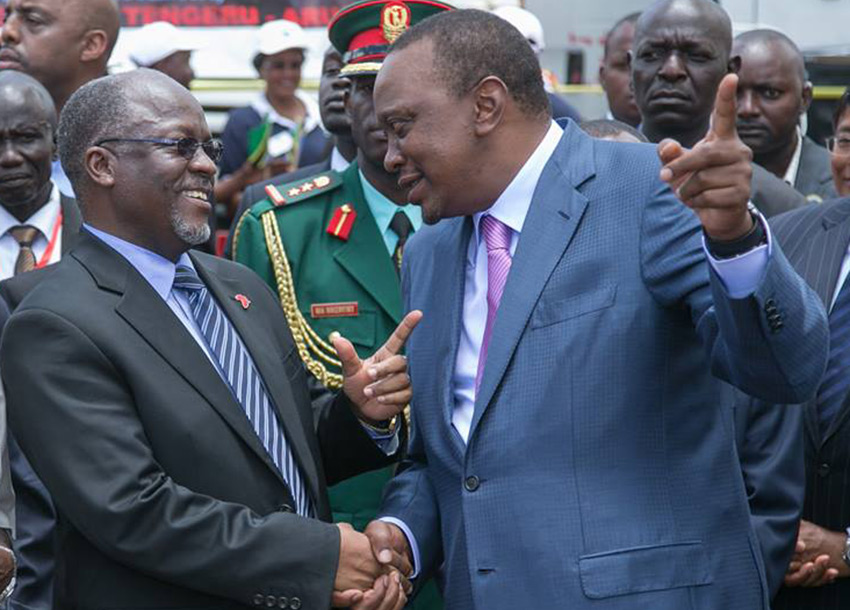 Magufuli demonstrated his articulation of Dholuo during the 17th Ordinary Session of the EAC Heads of State Summit that took place on Wednesday, March 2 in Arusha, Tanzania.

In a bid to make Uhuru feel at home, Magufuli wished he could address him (President Kenyatta) in Kikuyu dialect, but confessed he had no mastery of the language due to its “difficult” nature.

“President Kenyatta’s (native) language (Kikuyu) is of course very difficult, but I can speak Kijaluo that is also being spoken in Kenya,” acknowledged Magufuli.

Inquiring the wellbeing of Kenyans, Magufuli said in Dholuo: “Oyawre, wachi ane mar dala (mantie) machiegni,”(Good morning. Tell me what’s going on in the other land (Kenya) that neighbours us).

The statement sent Uhuru Kenyatta into stitches and equally garnered applause from the other visiting Heads of State.

President Kenyatta joined the other Heads of State from the East African Community for the official launch of reconstruction and upgrading works on the Arusha-Holili, Taveta-Mwatate road project in Tengeru, Arusha.

The Republic of South Sudan (RSS) was on Wednesday, March 2 admitted into the East African Community (EAC), increasing the membership of the common market to six with a population of an estimated 163 million people.

The 27th EAC Summit in Arusha, Tanzania resolved to admit the young nation into the economic bloc.

“South Sudan is a new member of the EAC,” the EAC secretariat officially announced.

Observers say the move was good for the world’s youngest nation, which has been struggling with a crumbling economy following a two-year devastating civil war.

“On the top of our expectation as priority after the admission of South Sudan is the timely and effective implementation of the peace agreement”, he said in a statement.

South Sudan applied for EAC membership soon after gaining its independence from Sudan in 2011, but the process of its admission delayed for a number of reasons.