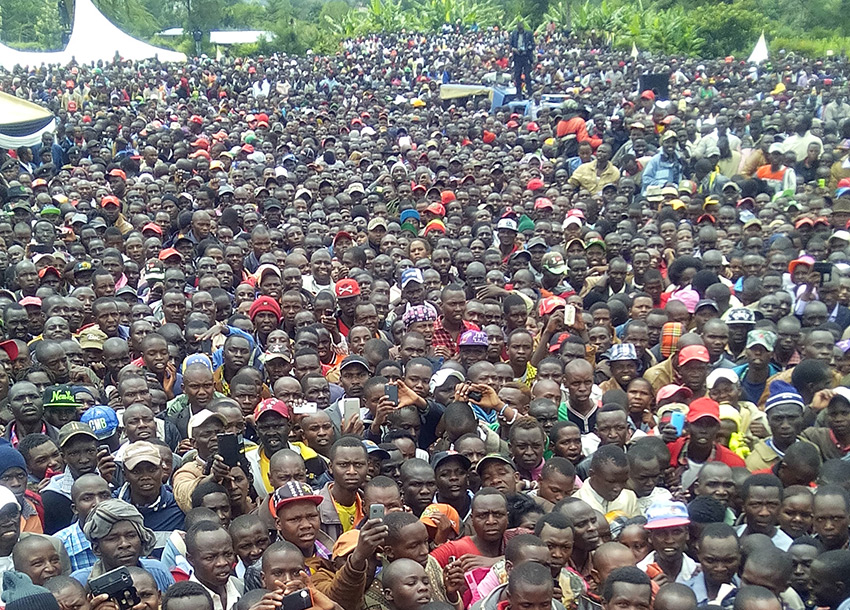 Kalenjin secular artiste Diana Chemutai Musila, better known as Chelele, was on Thursday, January 21, given an emotional send off at her Kapkwen residence in Bomet County.

The burial was attended by thousands of mourners drawn from different parts of the country.

Ruto promised to provide a legal team to pursue the case and ensure that the property of the deceased is safeguarded.

“I am shocked the suspect of Chelele’s murder is a police officer who is alleged to have killed another person. What is even more disturbing is that he was released on bond,” said Ruto.

“I urge Members of Parliament and leaders from Rift Valley to ensure that we take good care of Chelele’s young family. I offer to pay for all legal services that her family will require in pursuit of justice,” added Ruto.

“I am also open to receiving any form of aid given to Chelele’s family. No one will get hold of the late singer’s title deed. Her land now belongs to her children. The man who killed Chelele has no right whatsoever to inherit land or property of the late singer,” he affirmed.

Governor Ruto has also urged the government to be keen on matters security.

“We should continue pursuing Al shabaab. We cannot surrender to criminals. I fully support President Kenyatta’s mission to fight the terror group.”

His sentiments were echoed by Emurua Dikirr area Member of Parliament, John Ng’eno, who urged the government to beef up security around the Kenyan borders.

The renowned secular musician was on January 9 found dead in her house in Kapkwen, Bomet County.

Bomet County Police boss Leah Kithei said that the singer’s body had several stab wounds and was found on the veranda.

Police suspect that she was murdered elsewhere and her body dumped at her home by her husband, an AP officer, Eric Makau.

“The gate and the door to the house were opened and had no signs of break-in. We have gathered some details of the crime scene which we hope will help us in the investigations,” Ms Kithei said.

Chelele’s death came a few months after news on social media announced her death but it later emerged she had only been hospitalised after she allegedly attempted suicide.

The singer is famously known for her songs, Igaigayan, Meus Kondo, Mapenzi, Binti Osama, and Mashabik, among others.

Her husband, Mr Makau, was earlier arrested and charged for yet another crime – the murder of a prominent Eldoret land surveyor, Eliud Yego.

Mr Makau who has sired twins with the late singer was accused of shooting dead Mr Yego after suspecting that he had an affair with his wife.