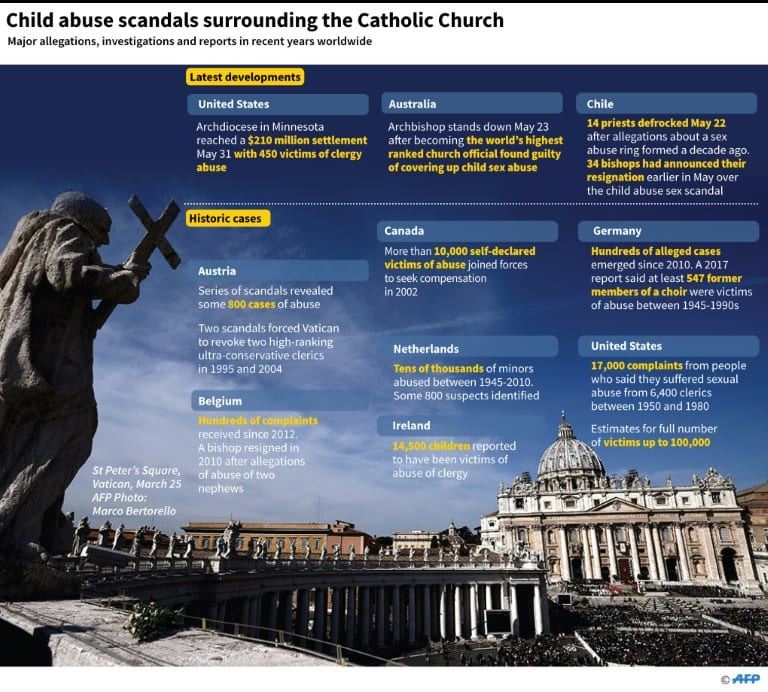 One of the highest-ranked church officials convicted of covering up child sex abuse was Tuesday sentenced to 12 months’ imprisonment, but Philip Wilson could avoid jail after a court ordered he be assessed for home detention.

The Adelaide archbishop, 67, was found guilty in May of concealing abuse by notorious paedophile priest Jim Fletcher in the Hunter region of New South Wales state during the 1970s by failing to report allegations against him.

He denied the charges and his legal team made four attempts to have the case thrown out, arguing Wilson suffered from Alzheimer’s and so should avoid trial — even though the diagnosis did not prevent him retaining his position in the church.

Newcastle Local Court magistrate Robert Stone found him guilty of concealing a serious indictable offence of another person, concluding his primary motive was to protect the church.

The same court on Tuesday sentenced him to 12 months’ imprisonment with a non-parole period of six months.

But Stone adjourned the matter until August 14 to assess whether Wilson was suitable to serve the sentence at his sister’s home. The maximum sentence for the crime was two years in jail.

In sentencing, Stone said “there is no remorse or contrition showed by the offender”.

“I am of the opinion the sentence should not be suspended. It does not support the terms of general deterrence,” he added.

“On that basis, the only available remaining option is full-time imprisonment or home detention.”

He justified the home detention option due to Wilson’s age, prior good record and that he was unlikely to reoffend.

There was no dispute during the trial that Fletcher, who is now dead, sexually abused an altar boy, with the hearing focused on whether Wilson, then a junior priest, was told about it.

Wilson served as a priest in New South Wales before Pope John Paul II appointed him Bishop of Wollongong in 1996. Five years later he became the Archbishop of Adelaide.

Following his conviction, Wilson stood down from his church duties pending sentencing, but did not resign.

The Australian Catholic Bishops Conference, a national body used by bishops to address issues of national significance, said it hoped the sentencing could “bring some sense of peace” to those abused by Fletcher.

“It takes great courage for survivors to come forward to tell their stories,” it added in a statement.

“Survivors have been vital in helping us learn the lesson of our shameful history of abuse and concealment.

“The church has made substantial changes to ensure that abuse and cover-up are not part of Catholic life and that children are safe in our communities.”

Like elsewhere in the world, Australia has been plagued by accusations that the Catholic Church ignored and covered up child abuse.

A national inquiry into the issue was ordered in 2012 after a decade of pressure to investigate widespread allegations of institutional paedophilia.

Another recommendation was that a redress scheme be set up to support victims with counselling, psychological care and financial payments.

All of Australia’s state governments have now signed up to the programme, which came into effect on Sunday and offers victims up to Aus$150,000 (US$113,000) in compensation.