Cabinet: Why Raphael Tuju will not be vetted 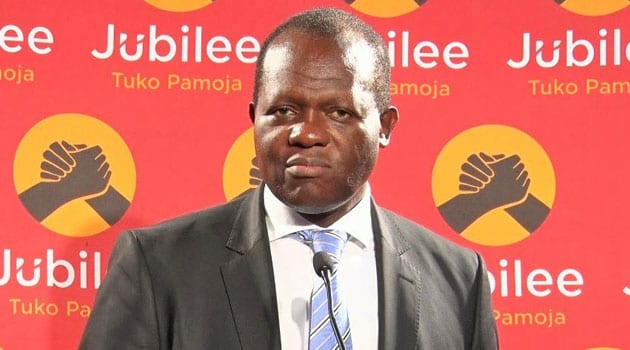 When President Uhuru Kenyatta was unveiling his second term cabinet on January 26, 2018 he announced that he had co-opted Jubilee Secretary General Raphael Tuju into cabinet on a need basis.

Some had thought that Tuju’s co-option into the cabinet meant he was a minister without portfolio to be assigned duties by the president from time to time.

The cabinet vetting however concluded on Friday, February 9, with nine ministerial hopefuls facing the appointments committee of parliament likely to join 12 others that were retained by the presidency.

Tuju was not one of them and now National Assembly Speaker Justin Muturi says the Jubilee Secretary General will only appear at cabinet meetings on invitation to address specific issues.

As such, Tuju will have no ministerial office, neither the trappings of power that comes with it.

Speaking to Citizen TV phone on, Tuju said his co-option is intended at enhancing the Jubilee party’s role in government, his mission being to help ministers align their programmes towards the party’s manifesto that was launched during last year’s presidential election campaigns.

As such, Tuju will remain the secretary general of the ruling party.

In the meantime, while the president announced the list of 31 principal secretaries across the 21 ministries two weeks ago alongside the cabinet secretaries, their vetting is yet to begin.

According to Speaker Justin Muturi, the names of the PSs are yet to be communicated to the House which has been on recess, a process that will be executed next week on Tuesday.

The cabinet secretary nominees were however vetted based on a procedural motion that was passed in December last year allowing the speaker to commit the names of CS hopefuls to the appointments committee without recalling the House.

The respective committees will then present a report to the National Assembly plenary for approval or rejection of the nominees. Thereafter, the PSs will be sworn in.

The committee of parliament on international relations will also be required to vet ambassadorial nominees and report back to the House for consideration before formal posting to foreign missions.