Drought situation: Over 250,000 households in need of aid in Marsabit 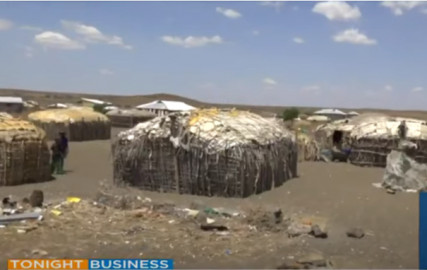 Herders and pastoral communities are counting losses after losing their animals partly to the ongoing drought in Marsabit County.

Over five hundred herds of livestock have died while a hundred thousand more are at risk, as more and more water pans continue to dry up in the vast county.

At Soriadi village in Laisamis, we find livestock lined up in the scorching sun to get water at a borehole, some of them having trekked fifty kilometres in search of the water and pasture.

But not all of them made it; carcases of cows, goats, sheep litter this vast county.

“When we want to do anything or buy anything for this borehole, we’re not able to because our livestock are so weak and there is no market to sell them, that means we cannot get any money,” said Ltepanoi Lemperelau, a herder.

Lerumpeiyan Lesipiti, a pastoralist, said: “We have had a number of challenges since the start of the drought…frequent breakdown of boreholes due to increase in number of animals coming here…..livestock watering from this point are now emaciated because they live in very far place, this contributes to emaciation.”

Marsabit Deputy Governor Solomon Gubo, on his part, stated that, “I’ve just learnt that there are some animals dying around Mt. Kulal, others in Turkana because of lack of pasture. From the report that I hav, around 500 animals – goats and sheep – have died so far.”

With two failed rain seasons, the situation in the county is dire.

Dr. Wario Sori, the Chief Officer of Livestock in Marsabit, said: “About 100,000 tropical livestock units are at risk and this was estimated in August…animals are already dying, a number of them have been constrained at home and are competing with households for food.”

In the hard hit areas like Saku, Laisamis and North Horr, 98% of all the service waters have completely dried up.

“As we speak, more than 180, 000 people in the county are in dire need of food, more than half of the county’s population…if there is no food, and there is no water, then there is conflict,” added Deputy Governor Gubo.

According to the 2019 census, Marsabit County had a population of nearly 460, 000 people; about 81% of the households depend on livestock for their livelihood. The current drought situation has now made life harder for many.

“It has brought about livestock trekking long distances between pasture and water, having livestock living away from the villages means that children and women have no food, this increases malnutrition at the household level, especially for children under five,” said Vincent Lekula, a Program Officer at Concern Worldwide.

Humanitarian organisations such as Concern Worldwide are working with other partners to boost the county’s resilience in responding to the drought.

Recently, the government listed Marsabit among nine counties that were at high risk of severe drought requiring high cost of response mechanism.