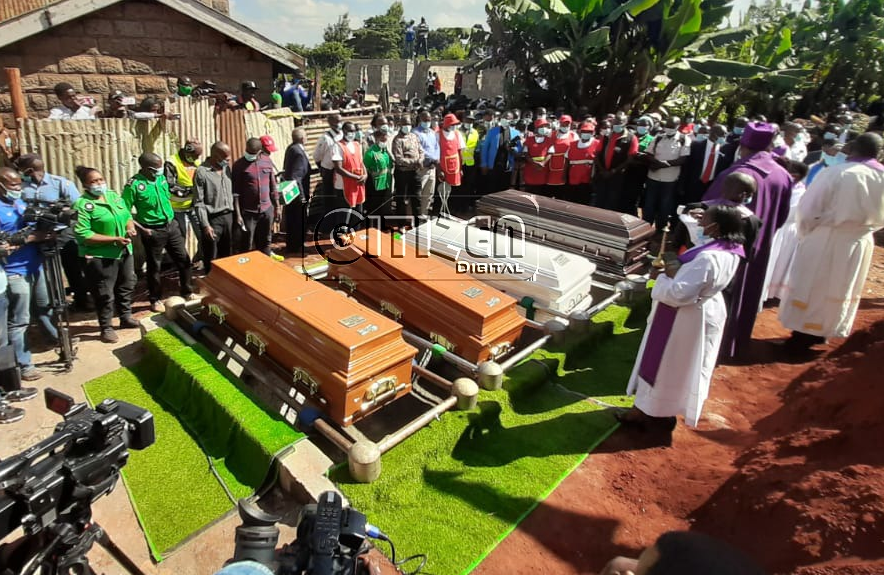 U.S-based businessman Nicholas Warunge, his wife, son and nephew were on Saturday afternoon buried at their home in Karura Ka Murimu area of Kiambu County in a heart-wrenching ceremony.

At the funeral service of the four who were murdered by the couple’s firstborn son Lawrence Warunge, religious and local leaders called on parents to monitor their children.

All those who took to the podium poured their hearts out to the two surviving daughters of Warunge, who were in school on January 5, 2021 when their parents and siblings were brutally murdered.

Too frail to speak at the funeral, the surviving girls’ joint tribute was read by their relatives.

Warunge’s sister Anne Wangari expressed the shock of the family that the main suspect is the son of a man who was a stickler for family values.

“As we go through this dark cloud, we know that our God in heaven is with us, He will shine His light upon us and one day we will have a reason to smile again. To those who took our family members’ lives, we have no words, Jehovah has the final say on this matter,” said Anne.

This as ACK Bishop in charge of Mt. Kenya South Charles Muturi who led the service called on congregants and the family to pray for the suspect

“I would personally want, one time, to sit with Lawrence as his bishop…and maybe Lawrence will make a confession to his bishop and say why he did this.  But we cannot continue condemning him, we should continue loving him and even pray for him,” said Muturi.

With Warunge’s firstborn Lawrence expected to be arraigned as the main suspect, local leaders called on parents to closely monitor their children and especially young adults and mentor them sufficiently.

Kiambaa MP Paul Koinange, on his part, stated: “I want to thank the entire department of the Directorate of Criminal Investigations led by George Kinoti and the homicide team for moving with speed to unravel the mystery behind these unfortunate deaths.”

The service was followed by a burial ceremony at the family home, the very home that is still protected as a crime scene.

The bodies of the four were lowered into one grave as villagers watched, many still trying to come to terms with what had happened.