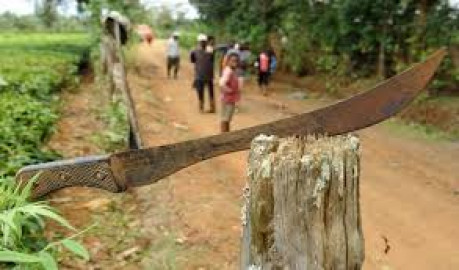 Police on Friday raised alarm over alleged regrouping of the outlawed Mungiki sect in some parts of Murang'a County.

According to Murang'a Police Commander Ms. Donatha Kiplagat, the police have intel that the outlawed Mungiki sect is penetrating to matatu terminus with a view of manning them and also recruiting members in some parts of Kigumo.

“We have information that the outlawed Mungiki sect is regrouping and we will not hesitate to arrest members of the group. Security will be beefed up especially in the parts of Kigumo and we request members of the public to cooperate with police to successfully clamp down the sect,” added Kiplagat.

While cautioning the youth against being enrolled into the sect, Ms. Kiplangat said security officers have launched a crackdown to ensure the outlawed sect that used to terrorize residents in the area does not resurge.

The commander was speaking at Kigumo sub-county headquarters at a meeting which was attended by Ahadi Kenya Trust Executive Director Stanley Kamau.

On his part, Kamau lauded the work which has been done by members of Nyumba Kumi, especially in the security sector.

“Nyumba Kumi has played a great role in fighting against crime and drug trafficking. We will continue engaging them to ensure we fight all illegal groups and beef up security in our villages,” she noted.

He pointed out that Nyumba Kumi has helped in lowering insecurity cases but decried that those included in the initiative are rarely appreciated.

“The work done by members of Nyumba Kumi is great but it’s unfortunate these people are not well recognized. As Ahadi Trust we have come up with a programme to appreciate them by providing them with shoes,” he added.

Mr. Kamau called upon stakeholders to support those involved in Nyumba Kumi economically so that they can perform their duties without many challenges.

“If Nyumba Kumi is well supported, cases of insecurity in our villages will subside. This is what we want since peace will promote investments at grassroots,” he noted.

Kamau further asked the government to consider extending the voter registration period, arguing that the one-month duration was not adequate especially for those in rural areas.

“I appeal to the government to extend the period of voter registration. Not all people, especially in the interior areas got information about the exercise. If the time is extended for one or two months, more people will register as voters,” he added.

Kamau requested Nyumba Kumi and the elders to mobilize locals concerning the registration process as well as render support to the sick and physically challenged in order for them to reach the registration centres.