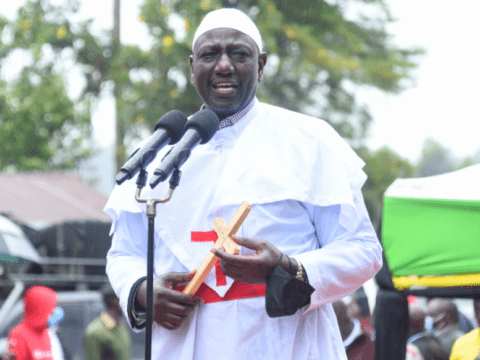 A week after the ban on politics in churches, politicians were on Sunday confined to the pews as churches guarded  the pulpit.

Deputy President William Ruto and his troops refrained and heeded to the call to respect the altar, instead taking his rally outside the church after attending a service in Githunguri, Kiambu County.

He was flanked by former Kiambu Governor Ferdinand Waititu who had defected to KANU, The Service Party (TSP) National Organising Secretary Karungo wa Thangwa, Narok Governor Josphat Nanok and a cross section of Central Kenya leaders allied to his camp.

The Anglican Church trail-blazed in blacklisting politicians from turning the pulpit into a political arena. The Catholic Church took cue followed by the Evangelical Churches of Kenya.

The businessman steered clear of politics at the pulpit, but only addressed journalists upon completion of the church service.

With political meetings and gatherings banned to curb the spread of COVID-19, Sunday services had turned into political rallies, with congregants turned into ready crowds the political class capitalised on.

Back in Kiambu County, the deputy president remained critical of any push to amend the Constitution.

Ruto blamed the president for the woes in Jubilee, saying the government abandoned its Big Four development agenda by a self preservation push to amend the Constitution.

The DP retreated to Amboseli for a two-day strategy meeting with leaders from the Lower Easter region as he plots to make a footprint in the Ukambani region.