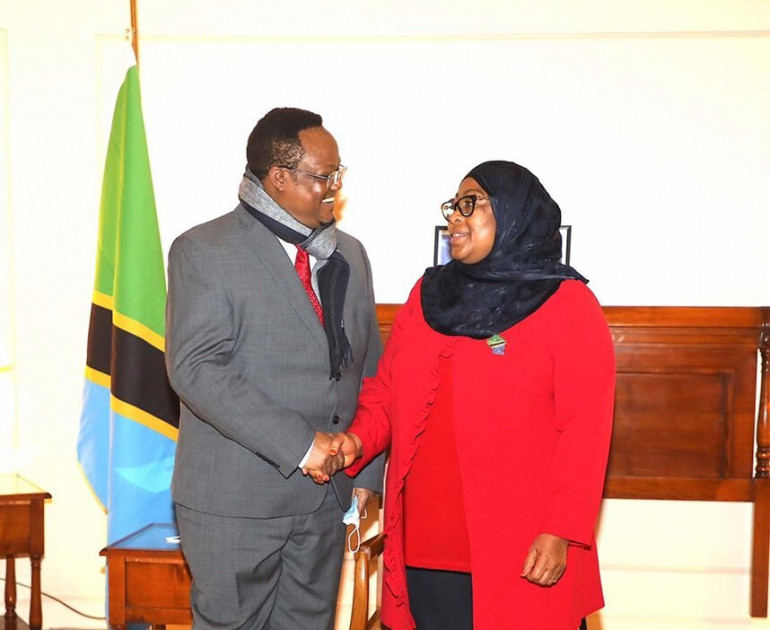 According to a statement issued by the Tanzanian State House, the two met in Brussels, Belgium, where Suluhu is attending an Organisation of African, Caribbean and Pacific States (OACPS) meeting.

Lissu, who is the Vice Chairperson of opposition political party CHADEMA was a key opposition figure in former President Magufuli’s administration and had made efforts to meet Suluhu since she got into office.

“The brief meeting, which took place in the Belgian capital, Brussels, was held at the request of Mr. Lissu.”

Although the presidency did not divulge further details into the brief meeting, the two are said to have discussed issues of mutual interest on Tanzanians.

“President Samia, who is also the Chairperson of the ruling Chama Cha Mapinduzi (CCM) party, and the Chadema leader discussed various issues of mutual interest on the state of the Tanzanian nation,” the statement added.

In what was seen as an assasination attempt in September 2017, Lissu sustained serious injuries after his car was sprayed with bullets while leaving the Parliament Buildings.

The incident came after Lissu announced interest in challenging Magufuli for presidency.

He has since moved to Belgium for treatment where he has undergone 25 surgeries but expressed readiness to return to Tanzania only if Suluhu addresses his assasination attempt.

After President Magufuli’s death in March last year due to what the State said were heart complications,  Lissu was very vocal about the demise on Kenyan TV and social media, saying instead that the Head of State had succumbed to COVID-19.

"What should I say? It is poetic justice. President Magufuli defied the world on the struggle against corona... He defied science... And what has happened, happened. He went down with corona," he added.