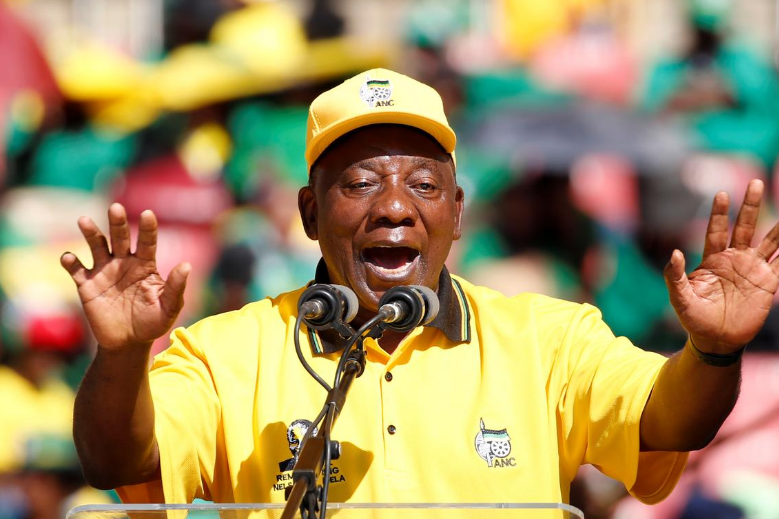 South Africa’s ruling African National Congress (ANC) will kick-start the economy and deal with corruption, it vowed on Sunday, three days before elections at which its overwhelming majority faces its sternest test since the party rose to power.

Though the ANC has won each parliamentary election since the transition from apartheid in 1994, recent opinion polls predict that it will bleed support to opposition coalitions that have gained ground as the ANC has been dogged by political scandal and a flagging economy.

President Cyril Ramaphosa, who took over from scandal-plagued Jacob Zuma as ANC leader in December 2017, told about 70,000 supporters packed into Johannesburg’s Ellis Park Stadium on Sunday that the party would punish members guilty of stealing public money.

A judicial corruption inquiry that began in 2018 has heard chilling evidence of how top officials took bribes from local and multinational companies in exchange for lucrative contracts from state firms.

“We are determined that those found guilty of corruption or involvement in state capture will not be allowed to occupy positions of responsibility, either in the ANC, in parliament or in government,” Ramaphosa said at Sunday’s rally.

“The era of impunity is over. We are now entering the era of accountability.”

The torrent of allegations has hit ANC support, especially in urban areas.

The EFF, formed by former ANC youth leader Julius Malema in 2013, has built its agenda on highlighting state graft and championing radical economic reforms the ANC has avoided, such as mine nationalization and land expropriation without compensation.

“The reign of thieves must fall, the reign of Ramaphosa must fall,” Malema chanted at a rally of about 40,000 supporters in Johannesburg township Soweto. “The EFF doesn’t have tolerance for corruption.”

Three opinion polls in recent weeks show the ANC’s support ranging between 51 and 61 percent, compared with the 62 percent it won in 2014.

The EFF won 10 percent of the vote in 2014 national elections. In local elections in 2016 it captured 12 percent, allowing it to play kingmaker in urban regions where neither of the top two parties managed to get past 50 percent.

Analysts said it was telling that the ANC, as well as the two largest opposition parties – the Democratic Alliance (DA) and EFF – held their final campaign rallies in Gauteng.

Despite being the province with the smallest land area, Gauteng generates more than a third of South Africa’s gross domestic product (GDP) and is the most populous province with a population of 14.3 million.

In 2016 local polls the ANC lost control of the three largest metropolitan municipalities – economic hub Johannesburg, administrative capital Pretoria, both in Gauteng, and Nelson Mandela Bay in the eastern province.

Ramaphosa said the ANC would revive economic growth and ease unemployment, which sits at more than 27 percent, by hitting an investment target of 1.4 trillion rand ($100 billion) and limiting policy uncertainty.

“It has never been done before in South Africa and only the ANC will be able to mobilize these kind of resources,” Ramaphosa said.

South Africa’s economic growth has slowed sharply in recent years, averaging about 2 percent in the past decade, while medium-term GDP is seen around 1 percent, well below the 4-5 percent needed to dent rising poverty and joblessness.

Malema said the EFF would grow the economy in favor of black Africans and the youth by doubling child grants, offering free university education and nationalizing key industries.

“Political freedom without economic freedom is meaningless,” Malema said, referring to wealth and income inequality that has remained racially skewed and the slow progress of the ANC’s policies of affirmative action and macroeconomic orthodoxy.

“We are not fighting white people. We are fighting to eat from the same dinner table,” Malema said.

“If we cannot eat from that dinner table, we will destroy the entire table.”