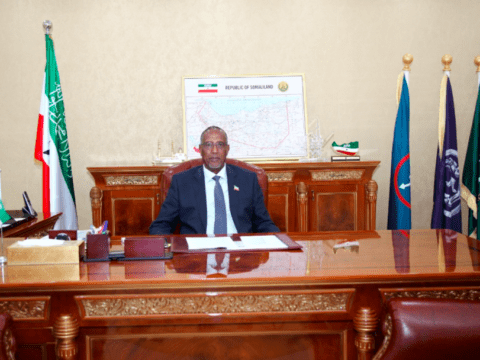 Somaliland President Muse Bihi, a former veteran and military pilot has earned praise from the International world as well as his opposition leaders for holding free, peaceful and transparent elections. This contrasts him from many African presidents with military background who violate election procedures to lead them a landslide win or create conditions that make it difficult for oppositions to participate competitively in elections.

Somaliland, an unrecognized former British protectorate, is known for it’s democratic elections but many perceive that this was the most credible election ever held in Somaliland.

President Bihi is being applauded for his decision not to postpone elections in the face of COVID-19 pandemic, locust invasion and widespread drought that hit this country. More over, this was the first joint elections Somaliland has ever had and his government financed 75% of the election cost for the first time in the history of this nation where the international community used to fund elections before.

Faisal Ali Waraabe, the Chairman of UCID party and the most prominent opposition leader says in an interview, “President Bihi was honest and sincerely committed to hold free and fair elections. He decided to face the global pandemic challenges and conducted a remarkably historic election.”

During the election, there was no major incident recorded at the 1624 stations people were casting their votes and generally the election was termed as free, fair and credible by both International and Local observers. Despite the fact that the 2021 Somaliland election results weren’t in favor of the ruling party, it has been widely accepted by all election stakeholders, including the president, political parties and candidates.

Among the interesting stories that ascended when election results was announced is that a local council candidate  from the opposition won an incredibly high number of votes and campaigned to also be elected as the Mayor of the capital by the councilors.

Surprisingly but admirably, the president convinced councilors from his party to quit the race and vote for the opposition candidate in respect of the huge amount of people’s votes he received.

Following the election announcement, the opposition parties made a political coalition to get the speaker of the parliament and despite very slight margin, an opposition candidate has been elected as the speaker, and immediately after the opposition speaker was elected, President Bihi invited him to the presidency to deliver his congratulatory message stating that “It’s a moment of national victory as the country practiced it’s democratic values.”

In conclusion, President Bihi’s neutral role and abstaining from any electoral intervention has painted an impressive image about Somaliland in the eyes of the international world, and this could lead this small unrecognized country to receive more international engagements and possibly the long awaited recognition.