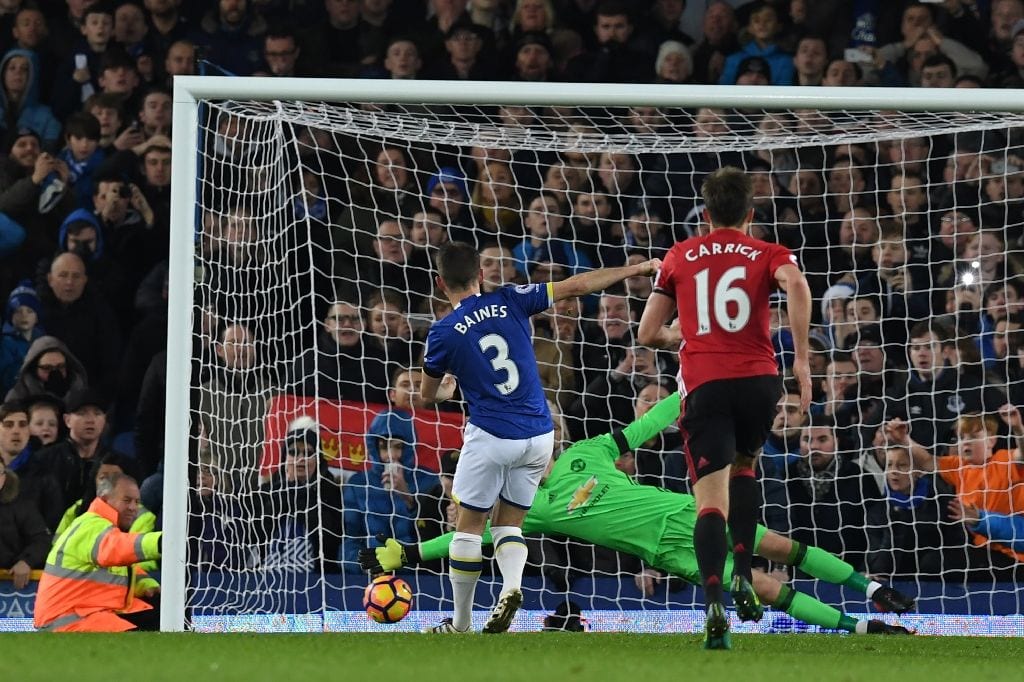 Leighton Baines scored a dramatic late penalty to add to Jose Mourinho’s problems as Manchester United were held to a 1-1 draw at Everton on Sunday.

Former Everton star Marouane Fellaini had only been on the field for two minutes as a United substitute when he tripped Idrissa Gueye unnecessarily and Baines made no mistake with a clinically-taken 89th minute penalty.

Zlatan Ibrahimovic had produced the only moment of quality in a disappointing first half, when he gave United the lead three minutes before the break, although the goal was as much a result of a mistake by Maarten Stekelenburg.

The Everton goalkeeper rushed out of his area, for no obvious reason, to try and beat Ibrahimovic to a hopeful through ball by Anthony Martial.

And Ibrahimovic, a former team mate of Stekelenburg with Ajax, cleverly lobbed the ball over the keeper and towards the open goal, the ball bouncing against the crossbar and the right-hand post before referee Michael Oliver judged it had crossed the line with the aid of goal-line technology.

United are now 13 points behind leaders Chelsea as their poor run extended to one win in their last eight league games.

Everton manager Ronald Koeman would have been angered that such an obvious individual error cost his team so dearly and would also have had cause for complaint over Oliver’s handling of an earlier appalling challenge from Marcos Rojo.

The United defender launched a flying, two-footed challenge on Gueye, but Oliver somehow judged it was only worthy of a yellow, rather than the obvious red it deserved.

Those were the only noteworthy incidents of the first period as United looked to improve on an indifferent run of two wins from their previous 10 league games.

Yannick Bolasie took up promising positions down the right flank but found his crosses dealt with effectively by the visiting defence, Phil Jones in particular.

Following Rojo’s yellow card, Kevin Mirallas’s resulting free-kick found Ashley Williams, who headed back for Tom Cleverley to volley straight up in the air from a promising position.

And, as United started to gain a foothold in the game, Ramiro Funes Mori tripped Henrikh Mkhitaryan on the edge of the Everton area and Ibrahimovic placed a tame free-kick directly into the home wall.

Koeman resisted the temptation to make changes at half-time and was almost rewarded with an early equaliser as Romelu Lukaku showed his strength to hold up the ball outside the United area before playing in Mirallas.

The midfielder advanced into the visitors’ area only to see his shot kept out by the outstretched leg of goalkeeper David de Gea.

Ander Herrera almost doubled the lead on the hour after Michael Carrick’s right-wing cross reached him and his first-time shot struck the Everton crossbar.

Ibrahimovic had been fortunate to escape a booking when he tangled with Seamus Coleman and caught the defender in the face as they lay on the pitch, an incident which led to the Everton man being replaced on 67 minutes.

Koeman brought on youngster Mason Holgate and, soon, Enner Valencia having already thrown in Gerard Deulofeu and the triple substitution brought about a marked improvement.

On 75 minutes, Gueye unleashed a powerful shot, from the edge of the area, which de Gea parried and saved at the second attempt.

And minutes later, a free-kick from Deulofeu caused United major problems as Holgate met it with a stopping header that forced de Sea into another fine stop.

Fellow substitute Valencia almost came close to an equaliser as he rose to meet a Holgate cross but headed directly at de Gea on his goal-line.

And, as Everton’s late rally brought their equaliser, they might have claimed a stoppage-time winner as Baines’ fierce shot was well stopped by de Gea at the foot of his post.