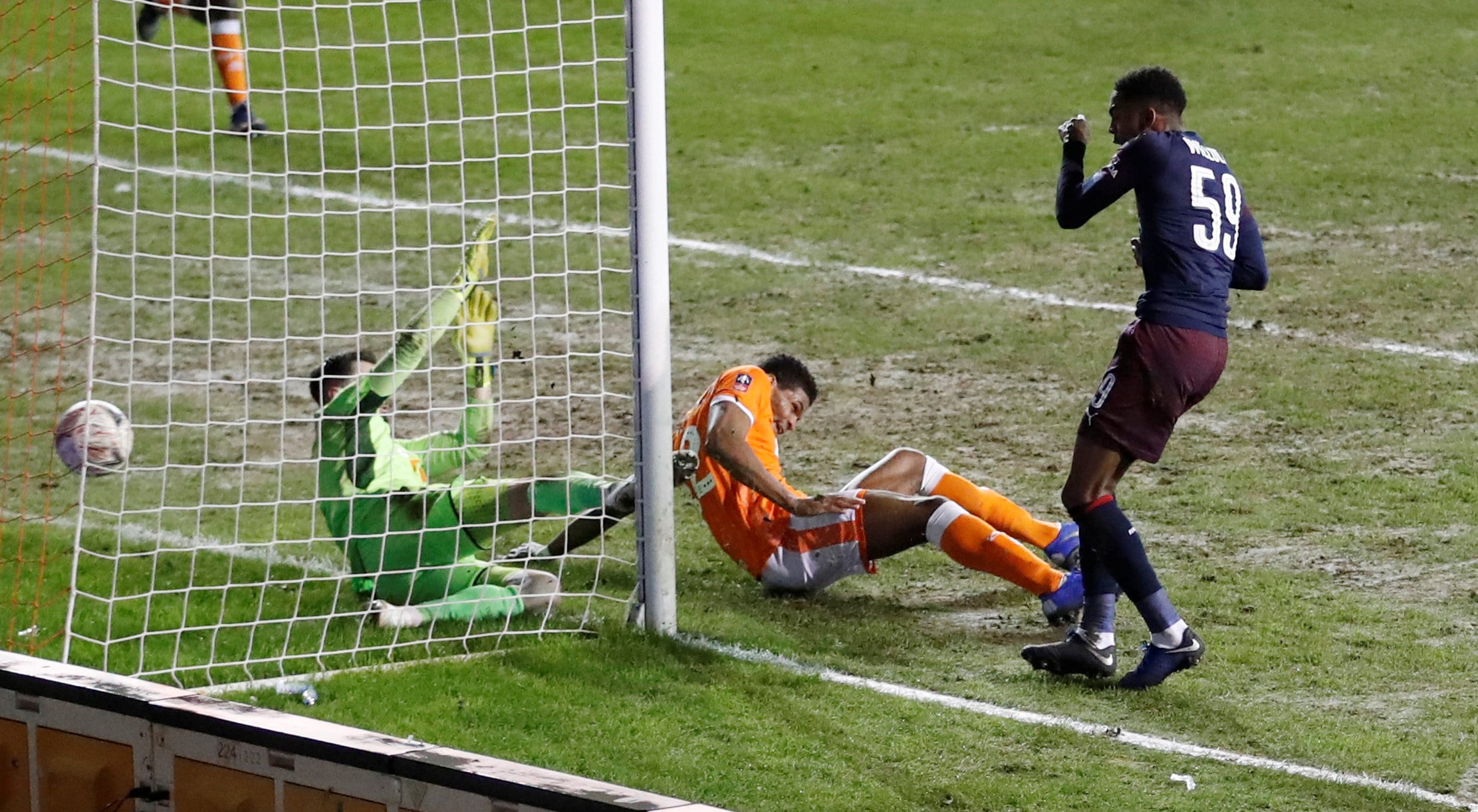 Arsenal cruised through to the FA Cup fourth round with teenager Joe Willock scoring twice at Blackpool on Saturday night as struggling Premier League side Huddersfield were knocked out of the competition by Championship side Bristol City.

The 19-year-old striker headed in after Aaron Ramsey’s free-kick hit the post and tapped in another before half-time in a 3-0 success for Unai Emery’s fancied side who are record 13-time winners of the competition.

League One Blackpool struggled to keep pace with the Gunners, whose arrival at Bloomfield Road was delayed when a protestor sat on top of their bus.

But after Armand Gnanduillet went close, they improved after the break before Alex Iwobi’s late finish.

Huddersfield’s dismal run continued as they were knocked out of the FA Cup in the third round by Championship side Bristol City.

Huddersfield, who are bottom of the Premier League, have now lost nine games in a row. Their best chance at Ashton Gate came when Steve Mounie lobbed goalkeeper Niki Maenpaa but the ball was cleared by Bailey Wright.

Elsewhere, Premier League side Newcastle United who are also fighting to avoid relegation saw a late Matt Ritchie penalty salvage a replay in a 1-1 stalemate as they drew at home to Blackburn Rovers.

Ritchie sent the impressive David Raya the wrong way to find the bottom corner in the 84th minute at St James’ Park after Bradley Dack’s powerful header had given the Championship side the lead.

Dack rose highest to meet Elliott Bennett’s cross in the 56th minute, but the Magpies hit back late on to avoid a second consecutive home defeat.

Jordan Ayew’s late winner put Premier League’s Crystal Palace into the fourth round as they finally broke down a resolute Grimsby, who played with 10 men for almost the entire match in a 1-0 win.

Mariners left-back Andrew Fox was sent off in the second minute for a high challenge on Andros Townsend, with the red card awarded by VAR.

Palace had 30 attempts on goal, only to be repelled by Grimsby’s fine defence. But Ayew rose to head in Jeffrey Schlupp’s free-kick in the 86th minute.

At Bloomfield Road, the hosts who had run Arsenal close during their fourth round Carabao Cup tie earlier in the season, which ended 2-1 to the Gunners were looking to mount an upset against the Gunners who last won the trophy in 2017.

But despite six changes to the Arsenal team, there was still a gulf in class from the start as Willock became the first Gunners teenager to score in the FA Cup since Ramsey – who ran the show here – in 2010.

Another teenage forward, Eddie Nketiah, could have had a hat-trick before the interval.

Any hope of creating a hostile atmosphere for the visitors was impossible amid ongoing protests about the way the owners run the club, which has seen fans stay away from games.

With 3,777 home fans present, added to Arsenal’s 5,218, Bloomfield Road was half-empty as Emery’s side easily moved a step closer to adding to their record 13 FA Cup trophies.

The protesting fan, who was later arrested, and a warm-up injury to skipper Laurent Koscielny threatened to throw Arsenal off course.

But Ramsey, who is set to leave the Gunners at the end of the season, played in a deeper role and offered guile and experience to keep the visitors on track.

The 28-year-old was the subject of several chants from the visiting fans, including “we want you to stay”.

No wonder. His passes were precise and his running energetic, and there is no lessening of his commitment as he nears the end of his contract.

He had already helped set up a chance for Nketiah, who hit the side-netting after three minutes, before his free-kick crashed against the post and Willock nodded in the rebound.

By that stage, Gnanduillet had already had his effort saved after waltzing through the Gunners defence.

But it wasn’t until the second half that Blackpool asked more questions with Michael Nottingham blazing over from close range.

Alexandre Lacazette replaced Nketiah after 64 minutes to add some extra pace to Arsenal’s attack and Blackpool were not helped when goalkeeper Mark Howard came off with an unspecified injury.

With eight minutes left, Ramsey’s strong run led to a shot which Christoffer Mafoumbi saved, before Iwobi poked in to put the result beyond doubt.